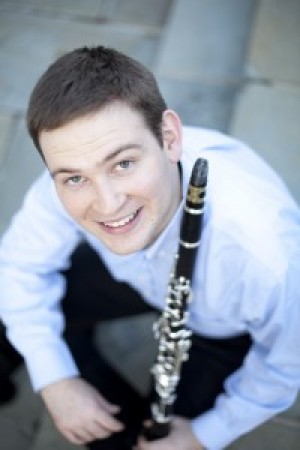 Recognized for his "rich, luscious tone quality" (The Clarinet), Rob Patterson has established himself as one of the most exciting and versatile clarinetists of his generation.  Mr. Patterson is an Assistant Professor of Clarinet at Boston University's School of Music. Upcoming engagements include working with young composers at the Curtis Institute of Music's Summerfest program, performances of Mozart’s Clarinet Concerto with the Baltimore Chamber Orchestra, and chamber music performances in Hong Kong as a part of Bright Sheng's two week Intimacy of Creativity festival.

A passionate educator, Mr. Patterson’s book Advanced Clarinet Studies was released to critical acclaim in late 2017 by Theodore Presser. He has served on the faculty at the University of Virginia, where he was featured in recital and as soloist with the Charlottesville Symphony. Recent masterclass invitations have included the University of Dayton, Morehead State University, the Grieg Academy (Bergen, Norway), the Sibelius Academy (Helsinki, Finland), the Royal College of Music (Stockholm, Sweden), the Norwegian University of Science and Technology in Trondheim, and the Norwegian State Academy of Music in Oslo. Previous teaching engagements include Carnegie Hall's National Youth Orchestra, the Curtis Institute of Music’s Summerfest, the Sewanee Summer Festival, and the Yellow Barn Young Artist Program. He has presented classes at The Juilliard School, Rice University, Teatro del Lago (Frutillar, Chile), James Madison University, University of Kentucky, Morehead State University, Virginia Commonwealth University, Virginia Tech, and Taipei Municipal University.

Mr. Patterson’s chamber music performances have taken him across North and South America, Europe and Asia. He has performed contemporary music as a member of the VERGE Ensemble in Washington, DC and was previously a member of the Philadelphia-based Ensemble 39, a mixed group of strings and woodwinds that is active in commissioning new works. As a member of Ensemble 39, Mr. Patterson collaborated with the Philadelphia Fringe Festival, Pennsylvania Ballet, and the Curtis Institute of Music in the World Premiere of What I Learned in Outer Space. The group was also invited to serve in residence at the Teatro del Lago in Chile. The residency included several performances as an ensemble, and members additionally coached the resident student festival orchestra in lessons and sectionals. Mr. Patterson has had the privilege to perform chamber music with such musicians as Toby Appel, Theodore Arm, José Blumenschein, Rafael Figueroa, Ida Kavafian, Elizabeth Koch, Maria Lambros, Daniel Matsukawa and Yoobin Son.

Mr. Patterson has been the featured soloist in Copland’s Clarinet Concerto with the Baltimore Chamber Orchestra and the Charlottesville Symphony as well as the Mozart Clarinet Concerto with the Lyrique-En-Mer (Le Palais, France) Orchestra, Binghamton Philharmonic, Middletown Symphony Orchestra, and the Howard County (Maryland) Concert Players. As a former Strathmore Music Center Artist in Residence, Mr. Patterson presented a series of solo recitals, masterclasses, educational concerts, and a recital at the John F. Kennedy Center for the Performing Arts, including the World-Premiere of John B Hedges’ Three Pieces for Solo Clarinet. Enjoying an ongoing relationship with Strathmore, he is frequently presented in recital both at the Music Center and in venues around the Washington metropolitan area. Festival appearances include The Peninsula Music Festival, Bravo! Vail, Festival Lyrique-En-Mer, Garth Newel Music Center, Music from Angel Fire, and the Yellow Barn Music Festival. At Yellow Barn, Boston Globe critic Jeffrey Johnson observed that in his performance of Edison Denisov’s Ode, Mr. Patterson “played the part with command, finding the extremes the work sought to articulate”.

Mr. Patterson released his solo recording in 2012 with financial support from a D.C. Commission on the Arts and Humanities grant. Featuring the World Premiere recording of John B Hedges’ Sonatina for Clarinet and Piano: Gumbo, the disc has earned critical acclaim and was voted Best Classical Recording of the Year by the Washington Area Music Association.

Mr. Patterson is proud to be a D'Addario and Buffet-Crampon performing artist